What is Mysore Practice? 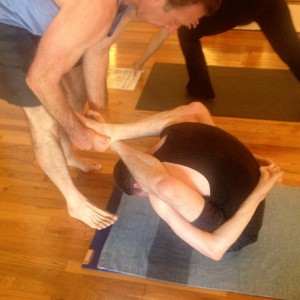 Mysore (pronounced my-saw) is the city in India where the long-forgotten Ashtanga Vinyasa System was rediscovered Sri K Pattabhi Jois under the direction of his teacher Sri T Krishnamacharya – two of the pre-eminent yoga teachers of the 20th Century.

In the West we are used to yoga being taught in a group class format where the teacher leads students through a series of poses. This is the way Ashtanga Vinyasa is frequently taught, but traditionally in India the student works independently and learns each postures one by one – Mysore Style.

Ashtanga Vinyasa consists of six prescribed Series. In theory, if a student has mastered all six series, there is a day associated with each series (as traditionally Saturday is not a practice day). The order of practice is:

Primary is always practiced on Friday and the day before a Moon Day, which ensures that Primary, the foundation series, is practiced by all students at least once every week.

Each series has a prescribed number of postures and, associated with them a defined set of vinyasa’s (transitions).

Every Series is designed to build on foundations laid in the previous one and within each Series postures are designed sequentially – each preparing the student for the next posture. This is the literal meaning of the word vinyasa – correct placement – the order or sequencing of postures. Until the student is able to perform a posture correctly, the body is not properly prepared to attempt the next one. In a Mysore Style class, the student is expected to stop at the posture they find challenging and move onto backbends and finishing.

Every Series begins with sun-salutes and standing postures; and finishes with back-bends and finishing poses. The seated postures in between are the main difference between each Series.

Primary Series is designed to prepare the body. Yoga Chikitsa means yoga therapy and the purpose of the practice is to begin the process of building strength and flexibility to ‘cleanse’ the body physically. It introduces the concept of breath, bandhas and drishti and initiates the act of concentrating the mind – pre-requisites before moving on to the next series. Although it is called Primary, this is not a beginner’s practice. Perfecting Primary takes energy and time.

Intermediate works on cleansing the nervous system (Nadi Shodana). The body must be prepared with a strong Primary Series before it is ready to withstand the challenges of this practice. Its focus is on back-bending, hip-opening and arm-balancing.

The Advanced Series is focused on strength and grace (Sthira Bhaga). This is achieved through more advanced arm-balances, hip-openers and backbends and requires practical and consistent application of bandhas and drishti.

In India, if a student arrived in Mysore and asked to learn the practice, the first instruction would be to learn and practice the sun salutes. If the teacher was satisfied with the students progress, the standing postures would be added, one-by-one, until the teacher decides that the student had done enough for the first day. The next day the process would repeat and continue up to a point where again the teacher decides that the student had done enough and/or has reached a posture that was too challenging. The process continues in this fashion, posture-by-posture, day-by-day. Gradually, the student memorizes the sequence and the sequence itself begins to strengthen and purify the body as each posture is perfected.

In the West most students come to Mysore with a working knowledge of Primary Series, though they won’t necessarily have it fully memorized. At Infinite, we encourage students to experience Mysore at this level, but suggest they combine it with traditional led-classes to become more familiar with its rhythm and pace. We allow practice cards (cheat-sheets) in Mysore, but urge students to gradually reduce their dependence on them.

However, unless a student is suffering from injury or has been given dispensation for another practice, we expect Mysore practitioners to respect the tradition and abide to the prescribed sequence of the Series.

When a student is ready to move into Intermediate Series, the teacher introduces the first two or three postures of the new Series after the seated postures of Primary have been completed. The student continues to practice Primary, followed by the postures the teacher has given them from that point on. The teacher will continue to add postures up to a point where the teacher is satisfied with the student’s progress, and either reduces the number of Primary postures – or removes Primary entirely. At that point the student practices Intermediate except on Friday (or the day before a moon day) when they practice Primary.

“Do your practice and all is coming”.